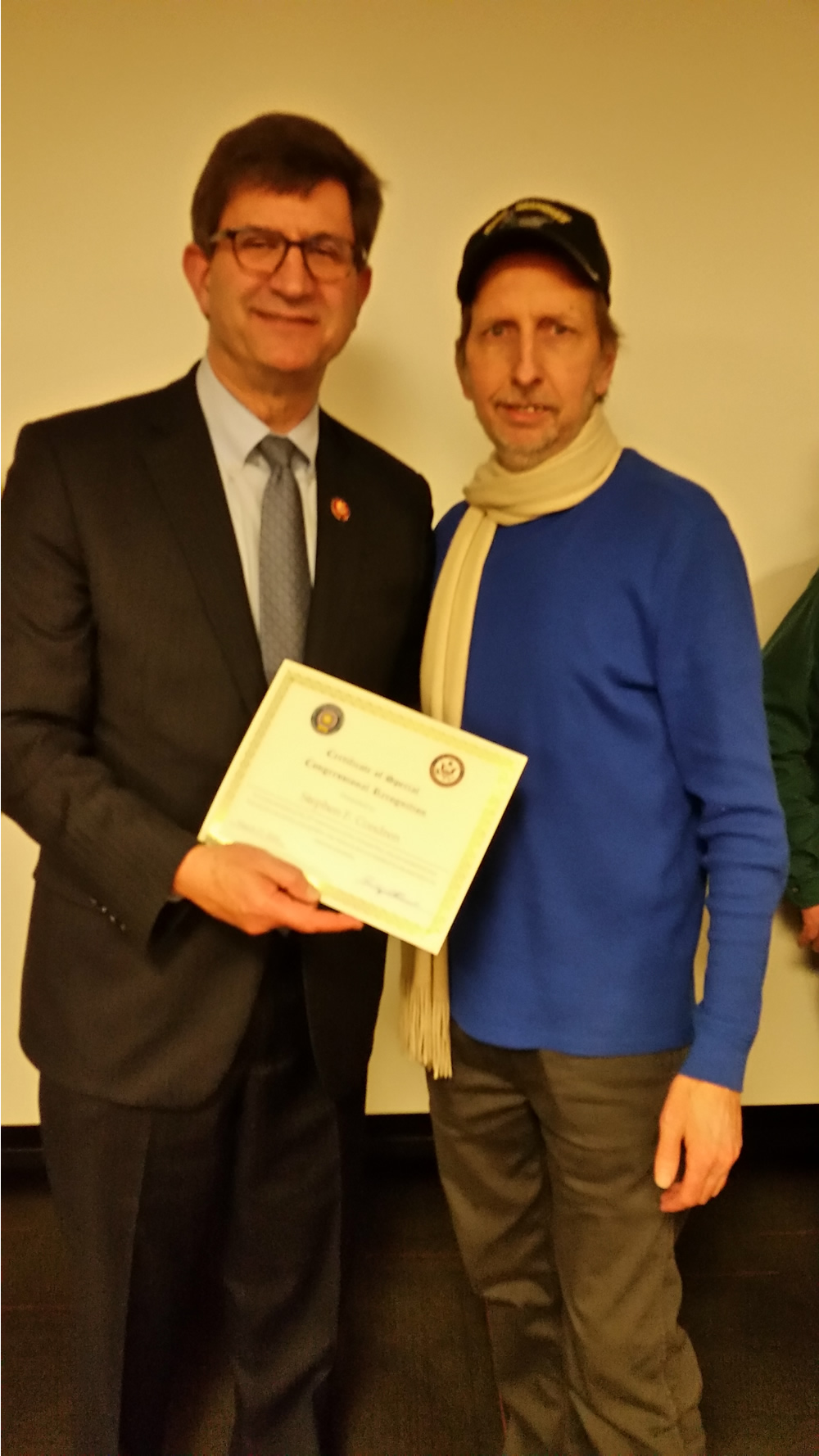 This article is about Congressman Bradley Schneider honoring Vietnam War Veterans, written by artist Stephen F. Condren, BFA-SAIC, of Condren Galleries, a Fine Arts Gallery. The event was to give Certificates of Special Congressional Recognition to the Veterans. Mr. Schneider posed with each veteran as he gave them their certificate. Most importantly, I proudly served aboard the USS Midway CV-41, and I was the ship’s artist for the Cruise Book “Taking care of business”. Congratulations Vietnam War Veterans!

I served my country with honor as I am an Honorably Discharged Veteran of the United States Navy.

My mantra is as follows: I am a man of honor, and if there no honor in it, I am not there. Put before me anyone that will argue otherwise.

The great thing about Veterans is that they think outside of themselves and direct their efforts towards others!

Veterans of the Vietnam War

Present at the ceremony to honor Vietnam War Veterans, were member of local American Legion and VFW post in all honor. These fine men and women that have served our country were there to support those that have given their lives for our freedom as well as to share in the spirit of truth and honor the service of our local patriots.

I joined the Navy at the very end of the Vietnam War, however, I was there in spirit. I served on the aircraft carrier USS Midway CV-41, now a museum in San Diego. Because the Midway was involved in “Operation Frequent Wind”, which was the evacuation of Vietnam, where there were many refugees on the Midway. I served my country with honor as I am an Honorably Discharged Veteran of the United States Navy.

While serving aboard the Midway, there was an art competition for the artist of the Ship’s WestPac Cruise Book “Taking Care Of Business”. Because I was the best artist on board, I won the competition. As the artist, I was given the honor to sit before the Commander of Carrier Group Three, Rear Admiral William Newell Small , Chief of Staff, Captain David E. Leue, Captain, USS Midway CV-41, Lawrence C. Chambers, and Executive Officer Captain L. H. Grimes Jr., and draw their portraits! Further, I drew every Department of the USS Midway CV-41.

After the Cruise Book was published Rear Admiral Small personally invited me into his suite on board the USS Midway and to expressed to me how pleased he was with the drawing. The Admiral had a copy made of the pen & ink portrait that I drew of him. After this, right in front of me, he sat down and wrote a commemorative note on the drawing and signed it. This signed drawing now hangs in my home and is ever cherished.

The Commanding Officer of the USS Midway was Captain Lawrence Cleveland Chambers. Captain Chambers was the first Black American to command an air craft carrier. Later in his career, Captain Chambers was promoted to Rear Admiral and Commander of Carrier Strike Group Three.

A short interesting story about the captain. One day while at sea the Air Boss, Commander Theodorelos, was looking out the window of his post on the island, and then noticed, with his naked eyes, a Russian Bear (Russia’s leading bomber), headed directly to the port side of the USS Midway. Immediately he sounded Alert-5 (a five minute readiness response by our F4 pilots). However, it was too late, long after our boys were in the air to escort the Russian bomber, it was long gone. I can just hear the Russians in their glory, howling with laughter.

Captain Chambers was notified of all this by phone, and when he heard that the Russians superseded the USS Midway without a strike force escort he took his phone and threw it at the bridge window ~ he cracked the bullet proof window! I would not want be the Operations Officer that day.

The final phase of the evacuation of Vietnam from Saigon is called “Operation Frequent Wind”. The USS Midway played a vital role in this strategic naval deployment. In the pen & ink drawing below is an image of Executive Officer, Captain L. H. Grimes Jr., holding a refugee child in his arms, securing the child’s freedom. This was the drawing that won the competition and secured my post as ship’s artist for the USS Midway’s cruise book.

For ship security and integrity, the helicopters used for the evacuation of Saigon where thrown overboard.

Below on my coffee table is one of my copies of the USS Midway ship’s cruise book “Taking Care Of Business”.

The ceremony took place at Cook Memorial Library in Libertyville, Illinois. Because there a large number of people attending, a large meeting room in the lower level of the library where the event took place.

The Congressman honored each of the Vietnam War Veterans with a Certificate of Special Congressional Recognition. He called each veteran up to the podium and stood next to him for a photo-op while holding the certificate.

The Room was filled to capacity, and the presence of the military and veterans was seen everywhere.

Photographs of the event

I personally want to thank you for recognizing the Vietnam Veterans. Further, I want to thank you demonstrating to us your care and concern for all of us veterans that served our great country. Most importantly, I want to say “Thank you, for giving each one of us veterans here today this most honorable Certificate of Special Congressional Recognition and Vietnam Veteran Lapel Pin!

God bless you and your family,

Condren Galleries is deeply honored to be part of the Vietnam War Veterans ceremony of Congressman Bradley Schneider #271Z.

As an artist and a Vietnam War Veteran I am proud to receive this Certificate of Special Congressional Recognition from Congressman Bradley Schneider #271Z.